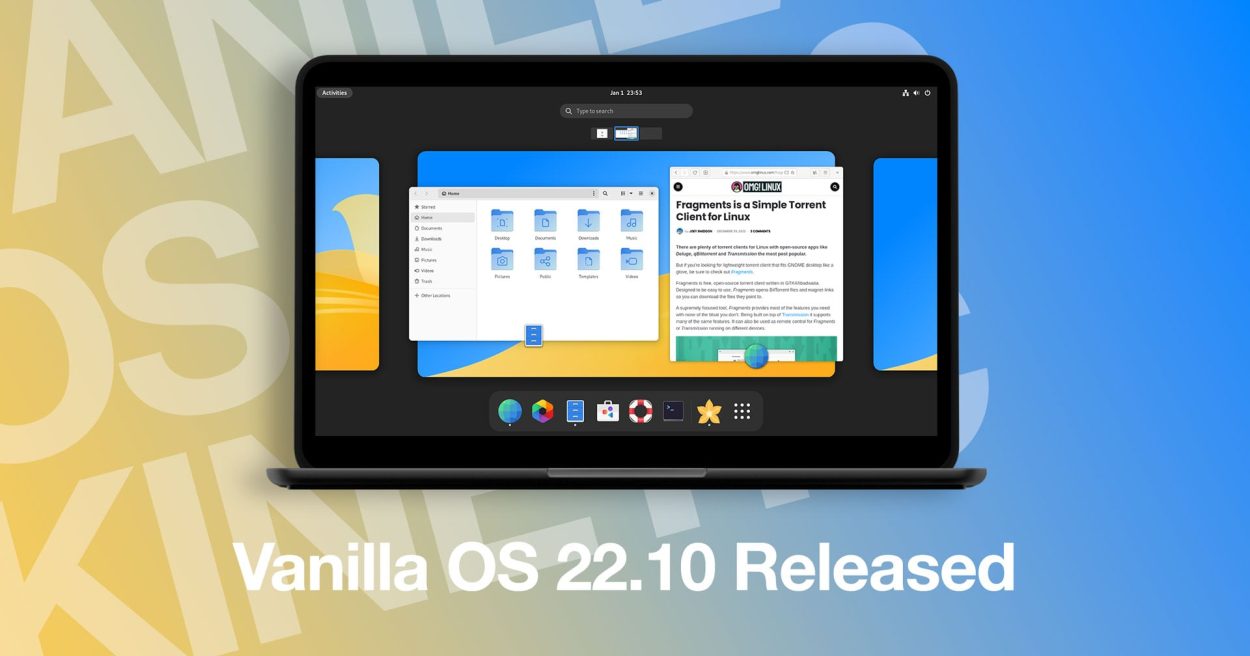 The Linux distro scene just got A LOT more interesting thanks to the first stable release of Vanilla OS.

Not familiar with Vanilla OS? You’re not alone. It’s a relatively new Linux distribution that only entered public development recently, and outside of a closed beta it hasn’t been available for the wider Linux community to try.

What is Vanilla OS?

Vanilla OS is an Ubuntu-based Linux distribution — but don’t let that put you off!

Ubuntu-based Linux distros are ten a penny but few diverge from the parent OS in technical approach. Not so with Vanilla OS. Far more than “just another” Ubuntu fork, this distro takes a bold new approach to desktop computing using an immutable file system.

Vanilla OS also doesn’t use apt. Instead it uses its own package manager and subsystem called apx. This is described as “a wrapper around multiple package managers to install packages and run commands inside a managed container” and is inspired by Distrobox.

Instead of running sudo apt install foo as you might on a regular Ubuntu-based distro you run apx install foo instead.

There are several cool aspects to the apx package manager, but the main two:

Firstly, the benefit of the containerised approach is that any apps a user installs cannot change, alter, or affect core system packages. This improves security, reliability, and stability. This is a real differentiator and is somewhat akin to what Fedora Silverblue offers.

Secondly, apx allows users to install packages from other distro archives. To do this it creates a container for each distro, and integrates apps installed inside of it with the base system. Subsystem apps work like other apps and can be managed from Vanilla OS Control Center.

This mix-and-match process has some downsides (disk space, being the main one) but it’s nigh-on impossible to tell a subsystem app apart from a Flatpak or a repo app installed using apx.

ABRoot achieves this by transacting between 2 root file systems: A and B. Let’s give an example. Let’s say you want to install a new package. ABRoot will check which partition is the present root partition (i.e A), then it will mount an overlay on top of it and perform the transaction. If the transaction succeeds, the overlay will be merged with the future root partition (i.e B). On your next boot, the system will automatically switch to the new root partition (B). In case of failure, the overlay will be discarded and the system will boot normally, without any changes to either partition..

Instead of installing updates automatically in the background, regardless of what the user is doing, the Vanilla System Operator only installs updates in the background if the device is not under heavy use, or not running low on battery. If it is, updates wait to install on reboot.

Despite a significant delta in how Vanilla OS works versus a traditional Ubuntu-based distro, I barely noticed a difference. Apps still install, they still open and save to local folders and drives, and they continue to take full advantage of system drivers and hardware.

Being based on Ubuntu 22.10, Vanilla OS uses the GNOME desktop environment by default. But unlike Ubuntu it opts to present users with a pure GNOME experience: no Ubuntu Dock, no Yaru theme, and none of Ubuntu’s other modifications.

A small selection of GNOME Core apps are preinstalled. These include the Nautilus file manager, the GNOME Software app (which runs better than Ubuntu’s fork), and Web as the default web browser.

More apps can be installed during the Vanilla OS First Setup process. Additionally, apps can be fetched from the Software app, from the Ubuntu repos (using the apx package manager), or installed from a different distro by using those aforementioned subsystems.

A nice collection of bespoke wallpapers are available, all coming in light/dark.

You can download Vanilla OS 22.10 ‘Kinetic’ from the Vanilla OS GitHub page. It’s provided as an .iso image you can boot in a virtual machine or flash to a USB drive to try it out on a real-world system.

If you do plan to install Vanilla OS on a laptop or PC with existing partitions/distros/OSes do be cautious. Vanilla OS is new, and this is its first release. Ergo, there may be bugs. Backup any important data before you do anything or stick to the safety of a virtual machine.