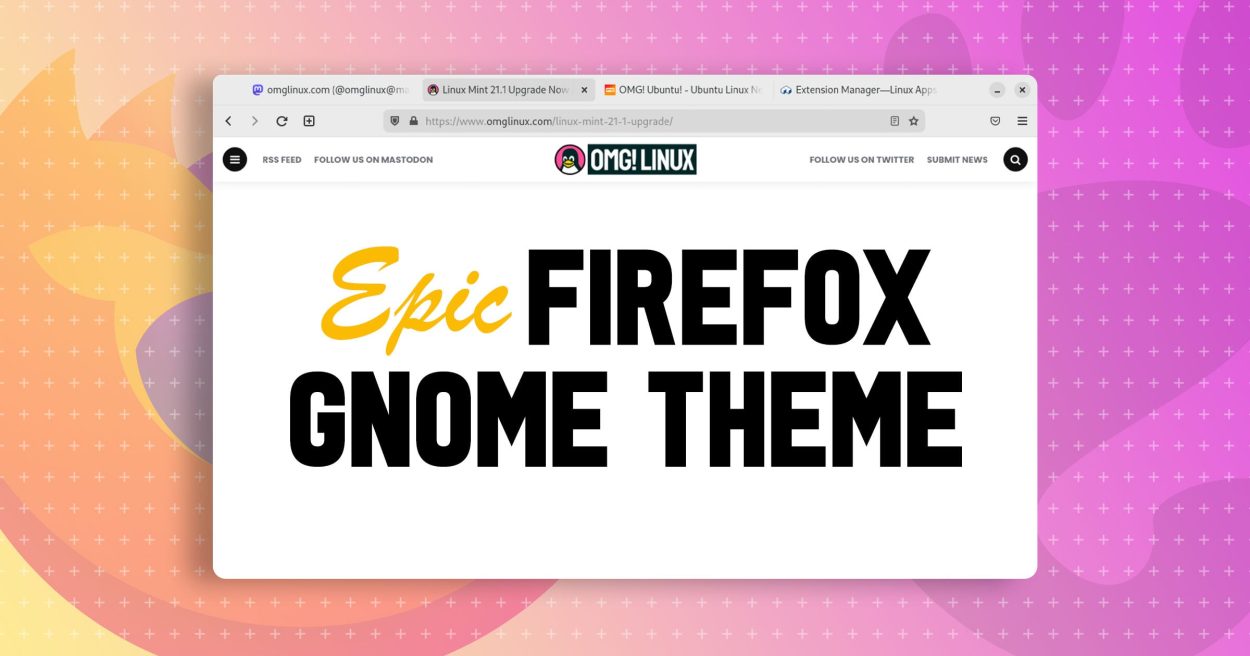 Mozilla Firefox is great: it’s free, open source software that works well, is updated often, and looks great on every Linux distro out there, regardless of desktop environment.

But did you know you can make Firefox look more at home on the GNOME desktop?

Yup, you can — all thanks to the Firefox GNOME Theme project!

In this post I detail just how dramatic this theme is; how you can install it on your system; and mention few additional tweaks you can make to complete the transformation.

Before we begin, let’s remind ourselves of what Mozilla Firefox is supposed to look like on a modern GNOME desktop, in this case Fedora Workstation 37:

But here’s how it looks when the Firefox GNOME Theme is applied:

As you can see, the Firefox GNOME theme is more of a Firefox Adwaita theme, as that’s the aesthetic it’s ably aping. We’re talking a true top-to-toe revamp here using CSS to restyle the browser’s UI to make it resemble a native GTK/libadwaita app — despite the fact it isn’t one.

From menus that have the same spacing and radius as Adwaita menus, to the same hover effect, active/passive tab state, toolbar colour, icons, and more.

No more awkward mismatches in menus, toolbars, and pop-overs – just a clean and cohesive look that makes Firefox look like a true GTK app.

By default the Firefox GNOME Theme remodels Mozilla’s browser into something that closely resembles the Epiphany (aka GNOME Web) browser. Look how similar they are in this screenshot:

You can go one further to make Firefox look like Epiphany: drag the “new tab” button from Firefox’s tab bar and place it in the left-hand section of the browser’s main toolbar.

Perhaps the best thing about the Firefox GNOME Theme (other than, y’know, the fact it looks awesome) is that it’s easy to install.

In fact, you can run a single command to install the Firefox GNOME Theme on most Linux distributions.

Once complete you need to restart Firefox (quit it, and reopen) and when it loads into life it will look a lot different!

Other UI tweaks you can apply:

But the most (imo) important tweak I make is:

Moving tabs to the top of the window is how regular Firefox looks (when title bar is disabled). This means the tab bar is also the title bar (i.e. houses window controls):

Personally, I dig the “tabs on top” look, despite it diverging from the Epiphany template the theme tries hard to emulate.

If you want to enable it on your system:

Fwiw, you can use the GNOME Firefox Theme with the Firefox Snap on Ubuntu, and with the official Firefox Flatpak build on Flathub. To do this, run the respective command documented on the project Github page!

Let me know what you think of this makeover down in the comments. I’m keen to know if anyone else is as much as an Adwaita as I am (at present, anyway).