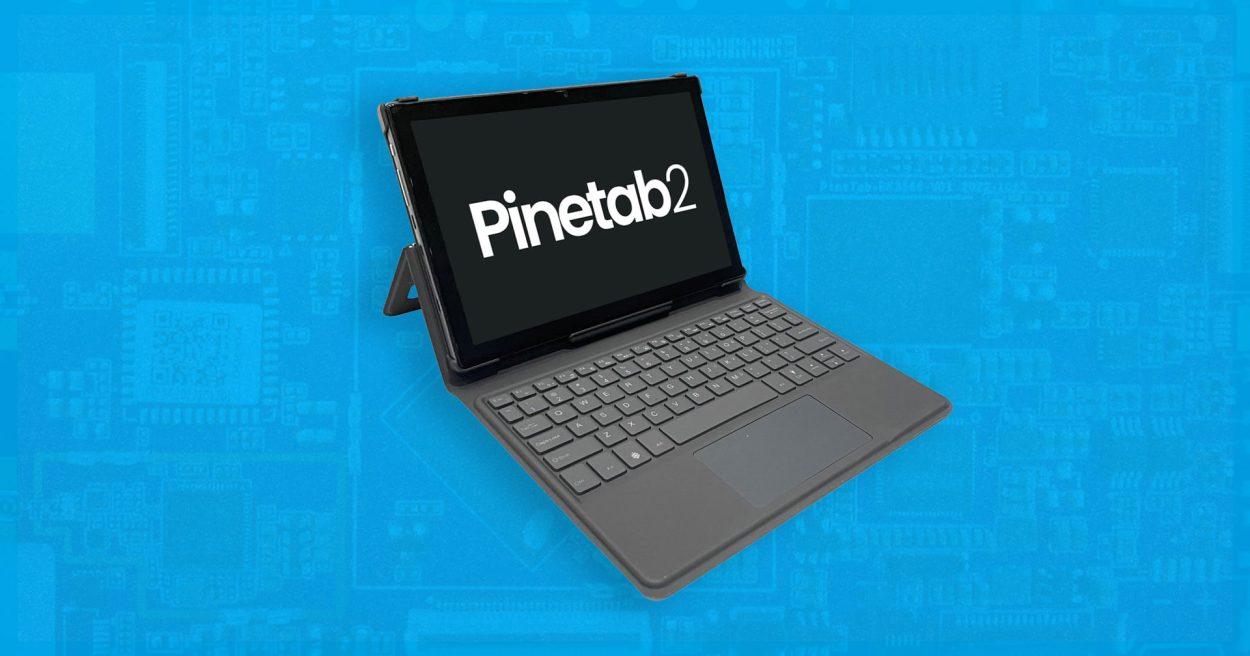 If you’ve been pining (heh) for a souped-up, super-fast Linux tablet running on open source software, Pine64 have you covered.

Today, Pine64 announced the PineTab2 – a successor to its original PineTab Linux tablet released in 2018.

Not that many people were able to buy the PineTab. Major supply chain disruptions owing to the pandemic (and the ensuring knock-on effects thereof) made it nigh-on-impossible for Pine64 to source the components and manufacturing slots needed to produce it.

But forget all that; that’s old news.

PineTab2: What We Know

So what can we expect from the second-get PineTab?

Firstly, an all-new design. The PineTab2 has had a full physical do-over, apparently. It now uses a metal chassis and is said to be simple to take apart (be it for upgrades or repairs). You just pop off the back via snap tabs, and you’re in.

Inside, the device sports a modular, end-user serviceable assembly. This is said to extend to even the tiniest of parts, like the built-in eMMC which sits on its own PCB. The goal, Pine64 say, is to make most of the tablet replaceable within minutes, and without needing special tools.

The tablet retains a 10.1-inch IPS display but adds tempered glass over the top. The slate is expected to feature smaller bezels than the OG model, though exactly how small is still TBD.

But what about Performance?

This chip runs cool, has fast I/O, and delivers a major performance boost over the Allwinner A64 SoC inside the OG PineTab.

The PineTab2 boasts 2x USB-C ports: one USB 3.0, and one USB 2.0 (intended for charging). It has a micro HDMI port, and 2 cameras: forward-facing 2MP camera, and rear-facing 5MP. A micro SD slot and a standard 3.5mm audio port is present on the leading edge.

At present the device is being tested with a 6000mAh battery but this is subject to change before manufacture — and most of these specs are.

Finally, there is a detachable keyboard that also functions as a cover. This is being included by default, and not as an optional accessory you need to purchase separately.

The keyboard specs are still being hammered out but Pine64 say it’ll be flashable with open firmware, and backlit for night-time typing.

When can I buy the PineTab2?

Pricing for the PineTab2 is not yet known. However, Pine64 do say it will be “affordable” regardless of which variant is bought.

Developer units are filtering out this month and next, and a tentative launch date of “after Chinese New Year” is mooted — plus some hands-on exposure at FOSDEM 2023.

On software, Erecinski says Linux development for the RK3566 is “booming”, and that both mainline Linux Kernel and BSP Linux support all of this chips core functionality. Distro support may vary but given there’s rich support for the chipset already, bringup should be easier.

Home > News > Pine64 Announce a PineTab 2 is Coming Next Year