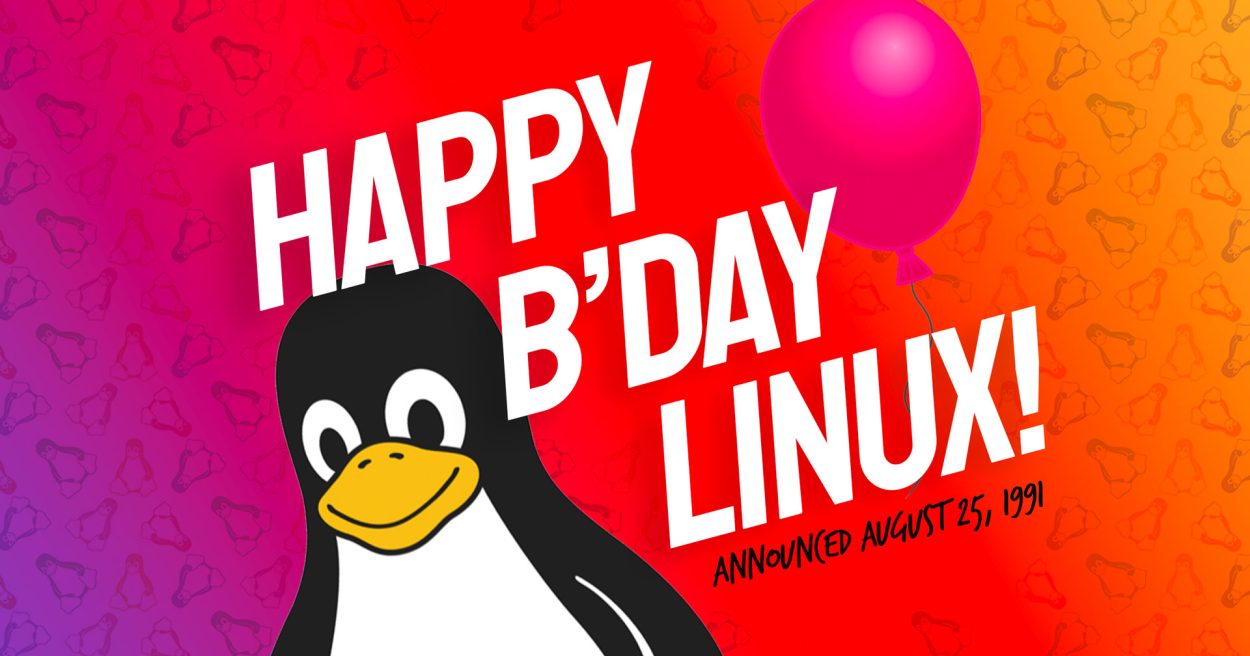 August 25 is the day on which open-source folk bust out the bunting, gather round a cake, and celebrate the founding of the world’s most famous computing kernel.

For it was on this very day 31 years ago that a 20-year old, fresh-faced Finn named Linus Torvalds cracked his fingers to type up a small announcement for the the Minix newsgroup.

The subject? A “hobby” operating system he was working on:

Hello everybody out there using minix-

I’m doing a (free) operating system (just a hobby, won’t be big and professional like gnu) for 386(486) AT clones. This has been brewing since april, and is starting to get ready. I’d like any feedback on things people like/dislike in minix; as my OS resembles it somewhat (same physical layout of the file-sytem due to practical reasons)among other things.

Cute, isn’t it? And in weird way Linus was kind of right. He said that his hobby project wouldn’t “be big or professional” and it wasn’t: it was way frickin’ bigger than that!

Linus kickstarted a technological revolution with his message that, no hyperbole necessary, effectively rewrote and redefined computing as we knew it. To date there’s been nothing as technically empowering, as profound, or as digitally democratizing as the Linux kernel.

Trying to think of a single of technology in 2022 which doesn’t run on OR rely on Linux at some critical juncture is difficult. And even when an end product isn’t ‘Linux’ there’s a fair chance it’s been affected or influenced by Linux’s impact at some point in its creation.

Of course, I’m preaching to the choir here; if you’re reading a site called “omg! linux” you’re not just aware of how successful Linux is, you’re also a key part of its success too — which yes, means you get to have some cake! 🍰

What you refer to as Linux’s birthday is in fact…

Although August 25 is generally considered Linux’s birthday as far as most folks are concerned (including the Linux Foundation, and they know a thing or two about Linux), the kernel may have as many as four birthdays, according to Linus himself — two more than Her Majesty the Queen!

Some prefer to mark the Linux kernel’s anniversary on the day that the first source code (of what would become Linux) appeared (September 17, 1991). Others consider the first mature 1.0 release to be the most applicable birthdate (March 14, 1994).

For what it’s worth, Linus himself doesn’t mind which date people choose to celebrate.

And as his hobby project turns 31, the guy must feel awed, proud, and maybe a little overwhelmed by the importance of his creation.

In 2022, Linux is at the heart of our digital world, from smartphones, routers, desktop PCs, servers, and beyond. The top 500 fastest supercomputers? They all run Linux. Linux even runs in space these days.

Wherever you are and whatever you’re using, I hope you join me in raising a glass of liquid enrichment to this “not big or professional” project that has touched all of our lives.

—Wait, are you pronouncing Linux correctly?

Back in the 90s Linus wanted to make sure people knew how to pronounce Linux so he shared the following audio clip of himself saying “Linux” for others to learn from. You can listen to that very message below courtesy of the TARDIS Wikimedia:

Some other Linux trivia: