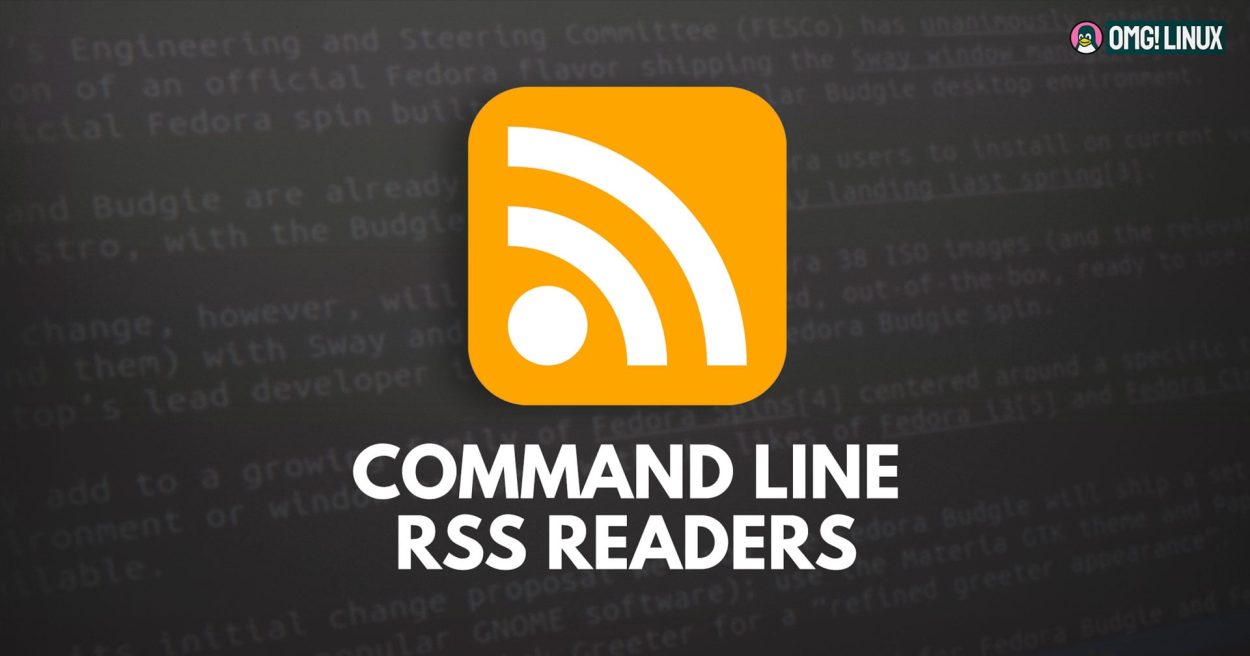 RSS feeds remain one of the best ways to keep a (non-algorithmically-adjusted) eye on the latest content from your favourite websites, blogs, projects, and more.

When combined with an RSS reader, the “Really Simple Syndication” format does the hard work of fetching news for you. Instead of you needing to open 10 different websites in your browser each morning, you open your RSS reader and see it all there, saving you time and effort.

A wide range of RSS reader apps (often called a news aggregator) for Linux are available. This includes desktop clients like NewsFlash, Liferea, and RSSOwl, through to side-features in other apps, like Thunderbird and Vivaldi (that browser does everything but your laundry).

You can also use a command line RSS reader, like the ones featured below.

Still, terminal-based tools are not for everyone, and some people find them more difficult to use than a traditional GUI tool.

When it comes to command line RSS readers Newsboat is the most well known, popular, and commonly recommended app in its class. At its simplest, Newsboat gathers together the latest posts from your favorite sources so you can browse and read them right there, in the terminal.

It helps that the Newsboat interface is very easy to navigate, even for those less familiar with ‘terminal user interface.’

Once you’ve added feeds (we’ll get to that in a sec) you can run newsboat, press R to pull-in the latest posts, then scroll through them using arrow keys, hit enter to open a feed, select an article using arrow keys, and enter again to load it for reading.

Since some content makes more sense in a regular browser you can instantly open any article you’re reading in Firefox (or another default) by pressing o whilst viewing the article in question.

Newsboat is highly configurable. Plenty of advanced features are available, including feed parsing (so you only see content you explicitly care about); customizable color schemes; and the ability to run external commands on feed items — plus a LOT more.

To install Newsboat on Ubuntu, Fedora, and other major Linux distributions check your distro’s archive for package name newsboat (you should find it easily as it’s widely available).

Next feed Newsboat some feeds. Create a ~/.newsboat/urls file (by hand, in any text editor), and add the RSS feed addresses for the sites you want to track inside of it, and hit save. Now, when you run newsboat in a terminal emulator it’ll track the links you added.

Alternatively, you can import an OPML file in Newsboat by running newsboat -i /path/to/feeds.opml. Or, if you use a cloud-based service. you can configure Newsboat to sync with cloud-based RSS readers like Tiny Tiny RSS, Nextcloud, and The Old Reader.

In short, Newsboat is the most powerful, configurable command line RSS reader out there. Yet despite that, it still manages to be accessible for new users with less demanding needs.

From super capable, to super simple. Nom is a no-frills RSS feed reader for the terminal that’s perfect for casual users not needing advanced features, cloud service integrations, keep tabs on they’ve read and what they haven’t, and similar.

Which is to say: simplicity is the selling point here.

Other CLI RSS apps do a lot but nom tries to do as little as possible. Focus rests squarely on content. The no-frills approach won’t suit some but the lack of features mean nom is blazing fast, intuitive commands, and a UI that’s beautiful to look at.

You can download nom from GitHub as a standalone binary app for Windows, macOS, and Linux. It is also installable via go, the details of which can be found on the nom GitHub project page.

To add feeds run nom add feed.url. Next time you run nom and hit r to refresh it’ll pull in the latest content from added feeds.

Use up and down arrow keys (or the j and u keys) to navigate the list of feeds interface, and hit enter to open an article for viewings. Press esc or q to exit article view, and again to exit the app.

I will mention upfront that Neix is no longer being actively developed (that I’m aware of; its GitHub repo is archived). Don’t let that put you off as it still works — and that’s the main thing! It’s sort of like mid-way point between the previous two CLI RSS apps.

Neix is an RSS/Atom feed reader for your terminal built with an interactive ncurses interface. It uses a cool two-pane layout that keeps each feed separate (rather than mixing all of the titles together with no indication).

You can import feeds from an OPML file or, as I did, add them manually by adding them to the feeds.conf file located in ~/.config/neix. There are some additional configuration options present (man neix will relay more) but I didn’t have time to explore those.

Neix is easy to use as keyboard shortcuts are shown on the screen at all times.

A few minor annoyances: it doesn’t remember which items in each feed have been read between sessions (it naturally remembers what’s read in the same session); and it doesn’t display full feed for some feeds (the Omglinux RSS feed is full feed but it’s truncated in the app).

To install it on a Linux distro simply download the source code from GitHub, extract the ZIP, then run the install script inside. Dependencies are modest: cmake, libcurl, and ncurses. Neix is also available in the AUR.

So those are my picks for command line RSS reader — but they are not the only options out there. Plus, RSS is a format with an extensive lineage a lot of fans, so there are plenty of feed readers out there catering to all sorts of tastes.

Let me know what your go-to feed reader is down in the comments — oh, and don’t forget to add omglinux.com/feed to whichever one you use!